Rebecca Loveless | Yours or ours?
15747
post-template-default,single,single-post,postid-15747,single-format-standard,wp-custom-logo,ajax_fade,page_not_loaded,,hide_top_bar_on_mobile_header,qode-theme-ver-9.2,elementor-default 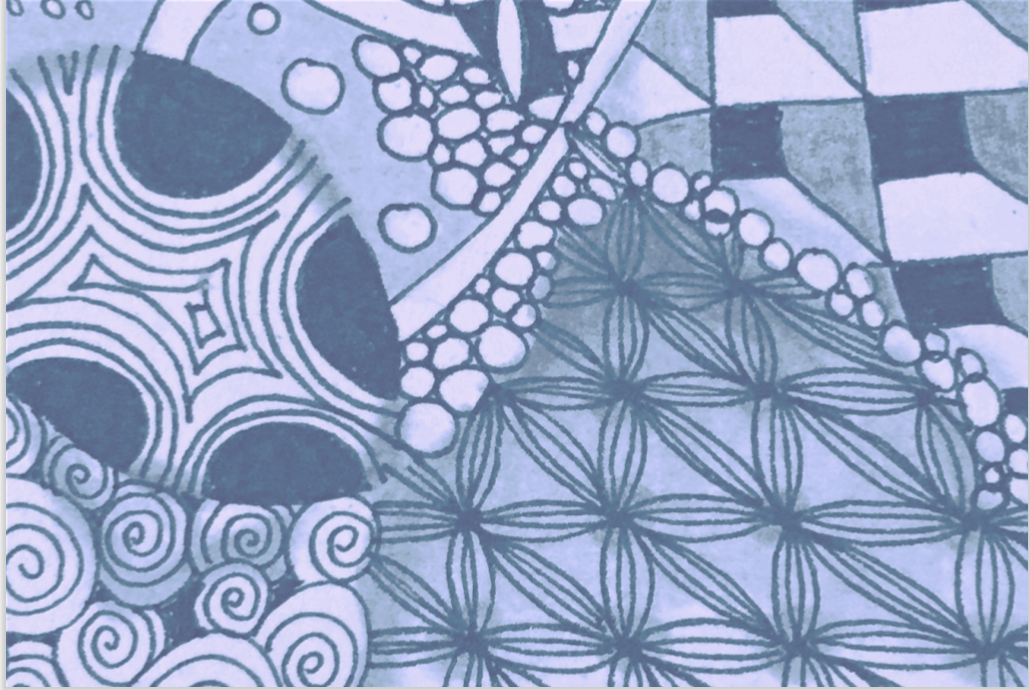 Posted at 19:54h in Education by Loveless

This past week in first grade we took on a couple of function words for our investigation. When we first started our SWI journey, these words were the most challenging to bring to a study because they often didn’t have other relatives that shared a base. How do you investigate words like <of> or <was> if you can’t add prefixes or suffixes to them? How do you explain their spelling?

This week we wanted to study the word <our>.

We started by asking the students to name some homophone pairs. This produced immediate engagement. The first graders love homophones. In fact, all ages seem to enjoy hunting for homophone pairs, which are so prolific in English. At the beginning of the year, a group of fifth graders independently started a shared online document so they could track as many as possible, even when they were at home.

One student was eager to share his favorite homograph: <saw/saw>

Homophones are more common in English than homographs. Since the words in the pair mean different things, they try to spell themselves differently. When I first heard this concept, some of my previous beliefs about how English is crazy and confusing were turned upside down.

“Language scientists actually have a name for this. It’s called the Homophone Principle,” I said.

A couple of surprised sounds escaped from the children’s mouths, and there without even trying, we had another homophone.

“Oh! Not like the principal of a school. Let me show you how we write it.”

I wrote the two words on the board in our list, noting the endings. “Even adults get these spellings mixed up sometimes.” I like to reinforce for students that our language is highly complex, and that it takes time to learn. First graders are often in such a rush to know it all and prove themselves competent readers. Learning through SWI investigations is a great way to reframe their expectations, since clearly there are plenty of things even the teachers don’t know!

“I’m going to put a sentence on the board and let’s see what you notice.” The first grade teachers love to jumpstart their investigations with juicy or silly sentences. The children are invited to share what they notice about any word, which is always very revealing. What will they comment on first? Eventually, someone will notice the concept we have planted for them, and we launch into a new journey.

We wrote, “Are you coming to our party?” on the board.

Earlier in the week, the teachers had noticed understandable confusion between the words <are> and <our>. In California, many of us pronounce these as homophones.

The first hands called on wanted to talk about the word <coming>. The children noticed the <-ing> suffix immediately. Someone pointed out that the word sum would actually show the final, non-syllabic <e> on the end of the base. These students have been busy practicing this suffixing convention, so they were eager to announce the word sum:

A final student announced, “Came! Came is in the family.”

Interesting. The word <come> doesn’t take the <-ed> suffix. The teachers noted this concept and flagged it for a future lesson.

Then someone noticed that “are” and “our” are homophones.

“That would make it easy to confuse their spellings unless we know what each one means, right? How can we investigate these words?”

Sometimes we can come to a deeper understand of a word by choosing a different word to look at, and then we return to the original word with a new lens.

“How about this word?” My co-teacher wrote < you > on a sticky note and we showed it to the class. “Can someone spell this word out loud?”

A student emphasized her recognition of the digraph by announcing the vowel letters together. We all spelled and tapped the graphemes on our arms. “Y — ou!”

“If we’re giving something to you, some cake for instance, then it would be ____ cake.”

“Your!” Their teacher wrote the word on another sticky note. We noticed the spelling, tapped it out: < y – ou – r >, and then I placed it directly under the <you>.

Finally someone thought of the word < yours >.

Comments like this one stem from the beauty of learning to see the structure of words right from the start of language learning. Can that <s> be called a suffix? We know the word <your> and we know that <-s> can be a suffix. I tucked that question away for myself. What is the grammatical function of that <s>?

As the sticky note landed on the board, observations were made. “They all have <ou>!” The word ‘our’ is inside ‘your!’

“Wow, do these words have any connection, meaning-wise?” I asked.

We continued by putting <ours> on the board. The excitement at the emerging pattern was getting electric.

“Basically these are opposites,” one student said. “If it’s not yours, it’s ours.”

We revisited the term “function words,” meaning all the “little” words that can help a sentence function. Content words, in contrast, generally hold more vibrant meanings – nouns, verbs, adjectives, many adverbs. Function words, like pronouns, prepositions, and determiners, often follow different spelling conventions than content words. These words are harder to define, but we can consider their grammatical functions while looking for connections to other words. This work is highlighted brilliantly in the LEX InSight Words Supplement Deck.

We had five words in our collection:

Could there be a sixth word to fill out our table? What would go with  <you>?

The word <you> is one form but serves different functions. As a pronoun, it can function as the subject of a sentence.

“You are coming to the party.”

But it can also function as an object pronoun.

“I am giving this piece of cake to you.”

Everyone was involved trying to figure out the missing word, even the teachers. Another co-teacher guessed, “We?” That would fit if we considered <you> functioning as a subject, but how does the word <we> share a structural connection with <your> and <our>?

If we consider the object function, the first person plural form is <us>.

This word doesn’t have the <ou> but it does have a <u>. The LEX cards mark this relationship with color. In fact, the cards only mark the shared <u> in all six words. We decided that we wanted the students to be aware of the <ou> digraph, so we chose to highlight the words that way. 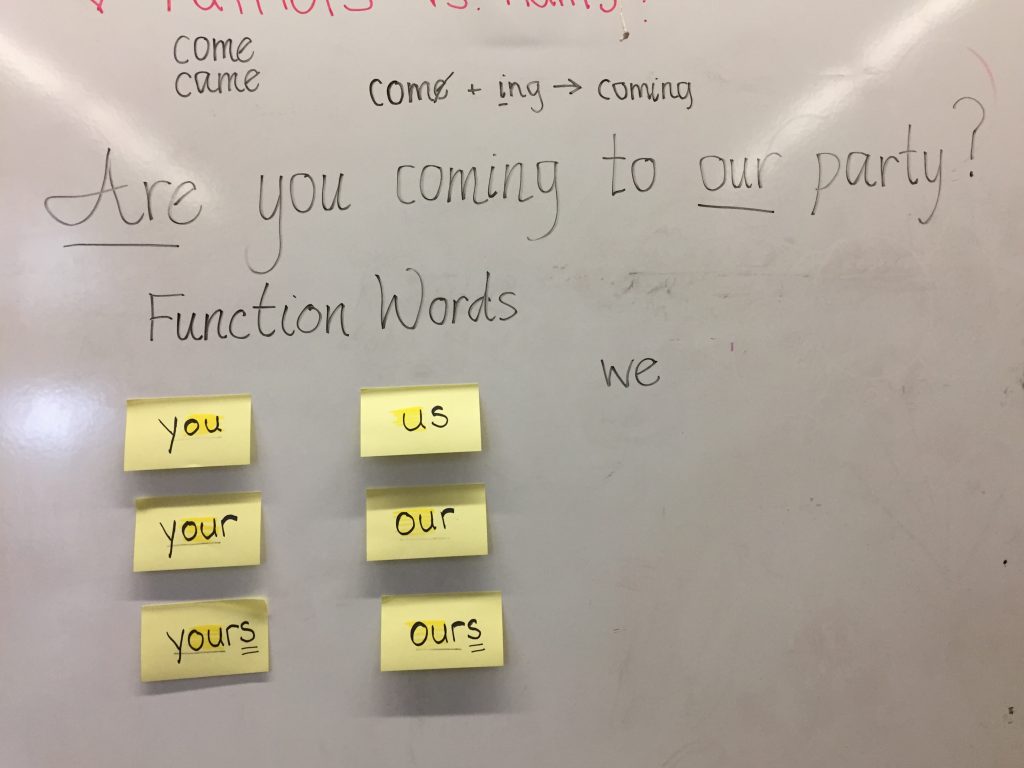 Our table was complete! But what about <are>? We talked briefly about how we use this word and what forms are used with different subjects. I am, you are, she is… We plan to follow up with it in the coming week since we wanted the students to engage in some independent practice. We sent them off with a sheet to record the findings of our discussion and create a couple of sentences with the words we had studied.

An SWI investigation can be sparked from small function words and grammatical concepts just as successfully as when we investigate a rich, long vocabulary term. All of these fascinating words are important to understand. By honoring the value and richness of our own continual study, we now know enough to know how. 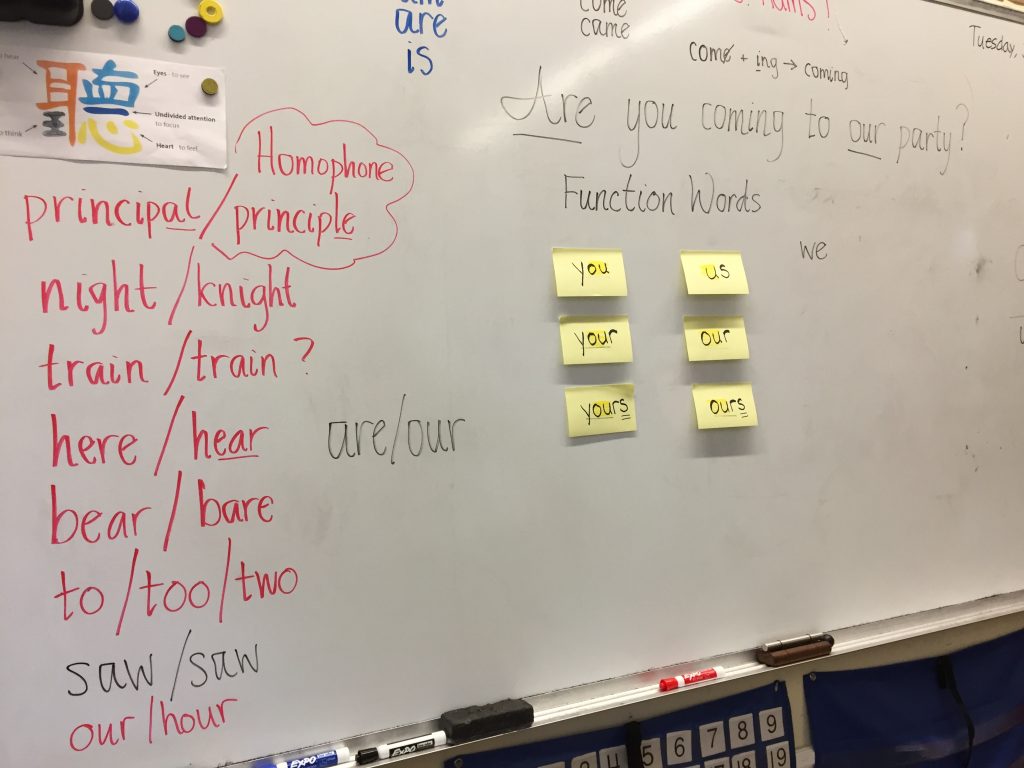