Posted at 23:44h in Education by Loveless

After the exciting Word Bag lesson that sparked so much interest, the teachers came to me with some big questions. One of the children created a word family at home that contained several cards reading <mom> and a few cards with long strings of random letters. How should they handle these words without crushing the child’s excitement?

Another child worked with the family of <build> and used the unconventional form <*builded> in his bag. They prodded the children’s knowledge a little bit but it seemed to be a generally accepted form. Was this the time to introduce conventional and unconventional forms?

The more a teacher studies orthography, the more information they have to draw from when students ask questions. I never would have considered “Strong Verbs” a topic requirement for PreK, but assumptions like that are more based on my own lack of understanding than anything. Strong verbs and their past participle forms are a perfect area of study for PreK and Kindergarten students as their knowledge of conventional forms of words develops.

During morning meeting I explained that our brains are super pattern detectors. “Your brains have done something wonderful! They have figured out that you can add an <-ed> suffix to words to show that something has already happened, like ‘Yesterday I played with my friend.’ But not all words use <-ed>. What if I wanted to tell you about my dinner last night? Would I say, ‘I *eated a hamburger?’”

Someone suggests the form <ate>. We look at <eat/ate> written on the board.

“And would you say this? ‘I *sleeped for a long time last night.’” Some children thought this was okay, but others recognized the form <slept>.

“These words that don’t take <-ed> are called ‘strong’ because they don’t follow the pattern all the other words do. They are also called verbs because they mean ‘things that we can do.’ (This simplified explanation felt right for this experience.) So these special words are called Strong Verbs. What’s the opposite of strong? Do you know what an opposite is? The words that do take the <-ed> suffix are Weak Verbs because they just follow along with the pattern.”

One of the teachers uses American Sign Language with the students, and she taught us the signs for “strong” and “weak.” The kids enjoyed using their bodies to incorporate this new information. They also noticed how the strong forms we looked at employed a < t > in their past participle forms. Brains are pattern detectors.

“Let me show you what happens with the word ‘build’ when grown ups use it in the past.” I wrote <built> next to ‘build’ and right away they noticed the continuing pattern.

“I actually don’t use the word ‘builded.’ Maybe I did when I was young, but now I know that people have agreed to use <built>.”

After this part of the discussion, they wanted to pull the remaining word cards from the <mom> family that a student brought in. A child pulled a card that had a string like <PNMOYNMOFYMMO> written on it. He looked quizzically at the card. The teacher asked, “Do you think that belongs in the family of <mom>?” 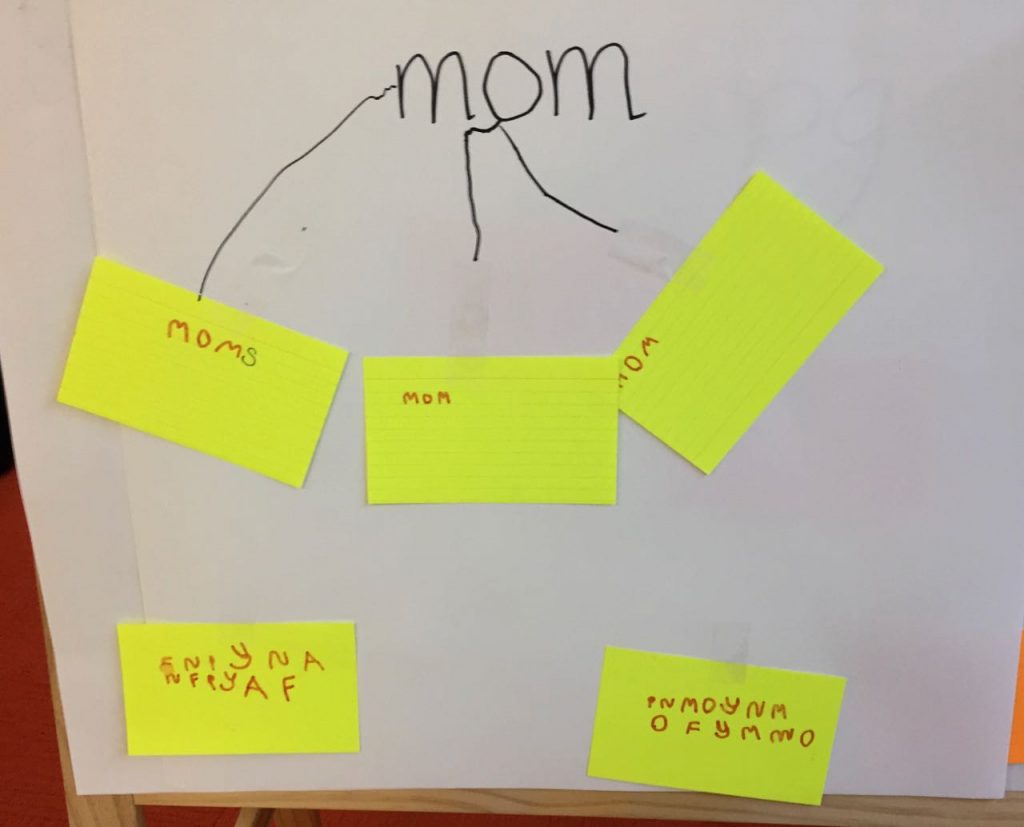 He replied, “No…I don’t even know what that word is.”

It seemed that this child recognized that this was not an English word. Often understanding what something isn’t is just as important as knowing what it is. Definitions can work in both directions. This was another assessment point. The boy who made the cards was working with the understanding that any string of letters can make a word. Words are still mysterious to him, but he thought if he put these letters he knew down in a couple of rows, maybe someone would tell him what they said!

The teacher said, “Oh, we just discovered something that isn’t a word in English. Sometimes you put letters together and they make a word, and other times they don’t make a word.”

I added, “Yes, it seems that there’s a certain order letters need to be in to make different words. That’s what we’re doing is learning about which graphemes we can put together to spell words.”

This was all stated matter-of-factly, honoring the gift that our emergent student gave us—new data about how words are constructed. The children are well-versed in the idea that we are always acting as scientists, whether we’re studying seeds or words.

We rarely hesitate to clarify misconceptions children have about how scientific concepts work. While we can accept that their conceptual understanding may become clear at different rates, we don’t hesitate to challenge their thinking. If we are teaching language as a science, wouldn’t we want to follow the same protocol?

A month later, students are still excited to create new Word Bag families. Each lesson becomes an informal assessment of the children’s growing knowledge. What better way for children to take ownership of their learning than by putting their new knowledge to work, constructing their own words? 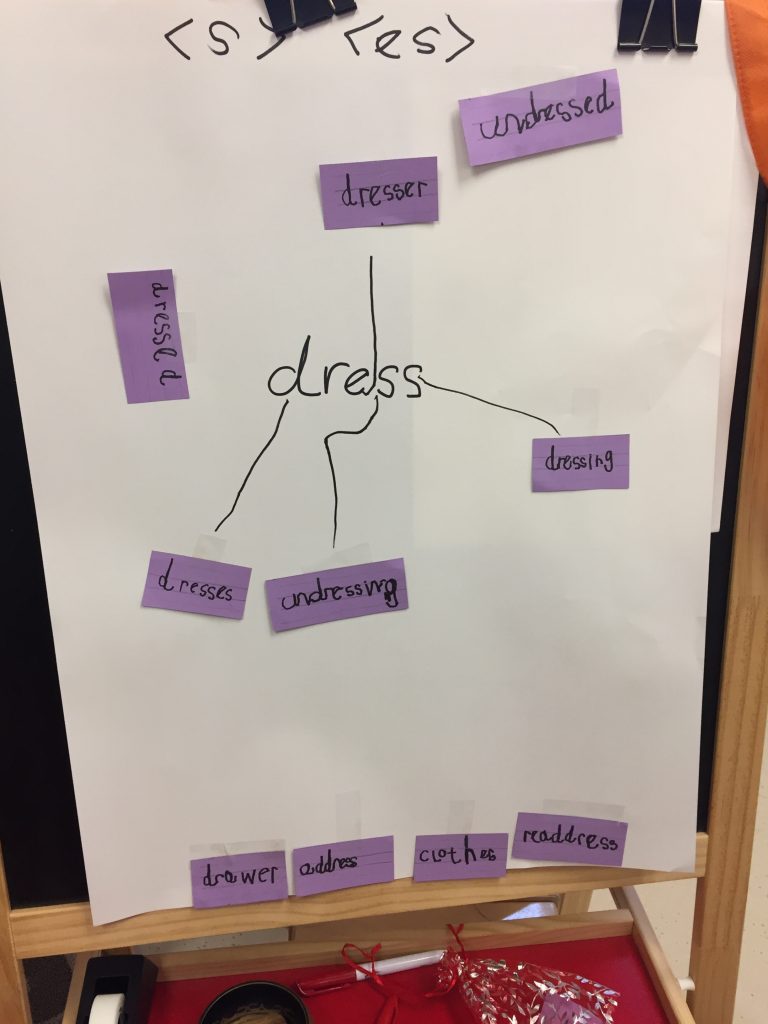