Posted at 04:09h in Education by Loveless

The new school year has begun at The Nueva School where I am the SWI Coach, and already stories about words have been flying my way. The third grade teachers introduced a project on the first day to help their students build a deeper sense of classroom community.  An art project was planned to follow an investigation of these questions:

Immediately, one student wondered aloud about the structure of the word ‘identity’ itself. How is it built? What might the structure reveal about the word’s definition, and how might that inform his response to the questions? Working together, the students proposed related words like ‘identify’ and ‘identification’. What does an ID card have to do with any of this? That short dialogue was as far as the investigation went, but the wondering lingered as a piece of the puzzle each student would later construct. 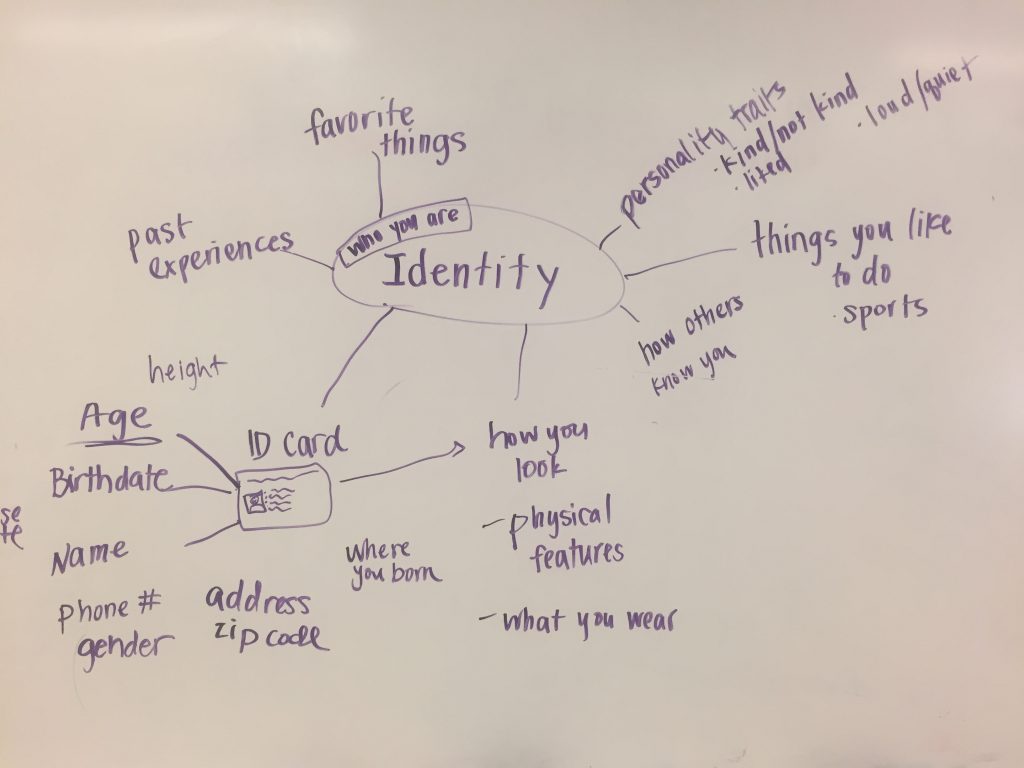 In a kindergarten classroom, students explored their new environment during choice time. A small group discovered a writing area with a Word Inquiry board. An example of a Real Script alphabet was posted alongside a picture of the cases that were used to store letters for printing presses. 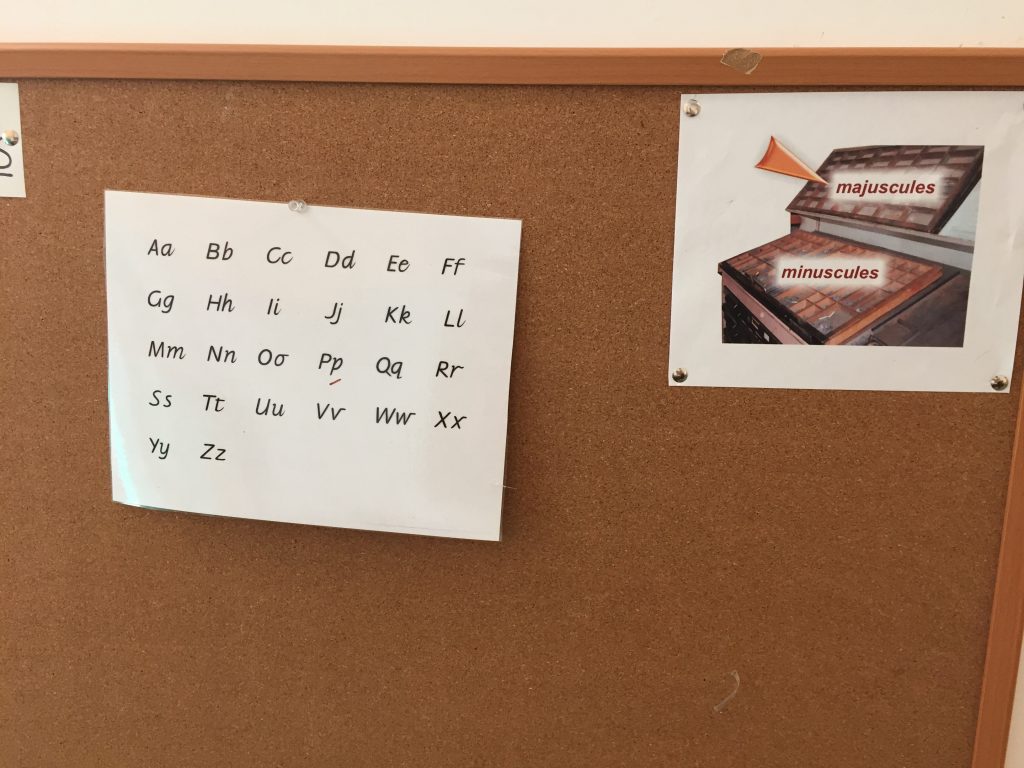 “Why are these things here?”

“So we can learn,” another replied.

One child suddenly asked, “What is P.S.?”

She had seen it somewhere but didn’t know what it was for. Lisa, the Social Emotional Learning teacher and a passionate etymologist, was nearby. She began documenting their conversation. They tried to sound out <P.S.> as a word.

“Platypus? When people say it but don’t say it clearly.”

The children began examining the Real Script alphabet on the wall. “Why is this here?” they wondered.

“I see that some letters are big and some are small.”

They admired the script, wondering about the flourishes they noticed.

“Why does this one have a tail?”

“Yeah, there is no room to write ‘and’ on the poster.”

Lisa talked with them about how important their hypotheses were and that she knew a way to help investigate them. The children were eager, hoping to find out the answer quickly. Instead they received their first lesson that Nueva is a place that honors questions over answers, and that language is a science that deserves the same time and care as all its other branches.

A few days later, the first graders were having their introduction to Social Emotional Learning class, also with Lisa. They spent a little time looking at the words ‘social’ and emotional’. After a year of working with SWI in kindergarten, they quickly keyed into the structure of <emotional>.

“It has the word ‘motion’ in it. So your emotions are moving.” 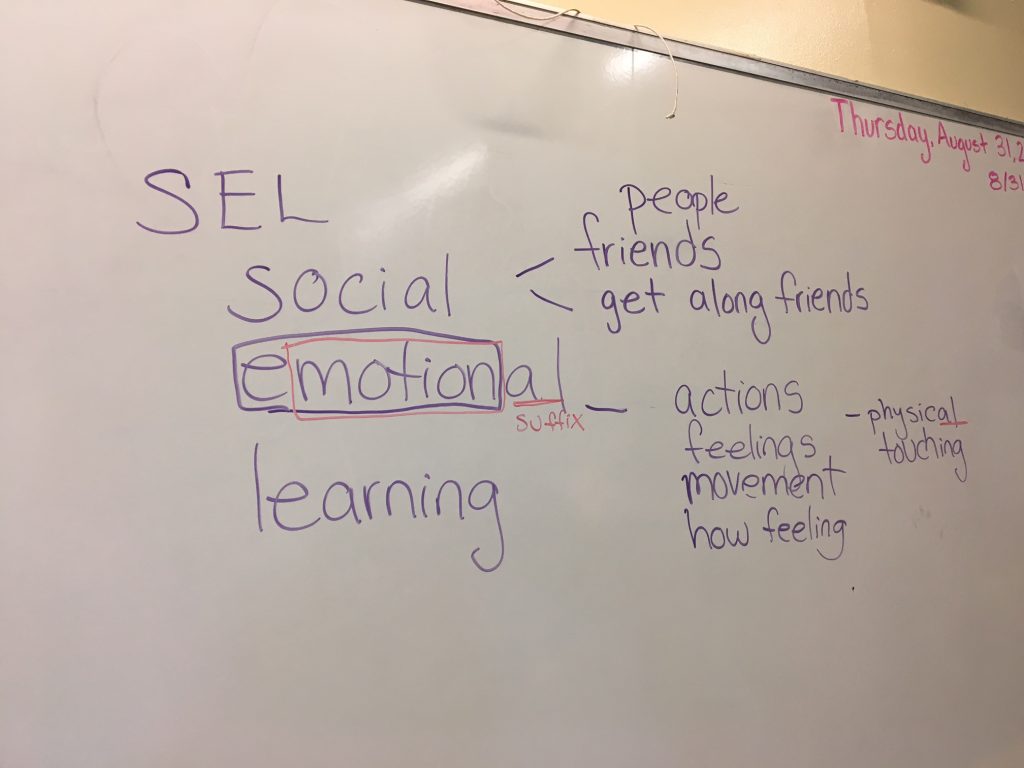 It makes perfect sense that even the youngest children, without much experience, are curious about how words and language work. Understanding the writing system is one of their primary “jobs” as they work toward becoming literate humans. Simply setting up the environment to provoke questions has set the stage for the learning to come.

I was so encouraged to hear that those students with experience analyzing word structures drew on that knowledge unprompted by any teachers. That says to me that they have come to independently value investigation as a tool. It has been useful in the past, bringing them helpful information and insights. They know there can be hidden meaning inside words, and it enlivens them to work towards finding it.

Teaching our youngest students how to recognize the structures within words is a gift. Soon, they too, will be digging for the meaningful treasures buried inside, ready for the inevitable gems of insight that structure and etymology provide. Onward we go!